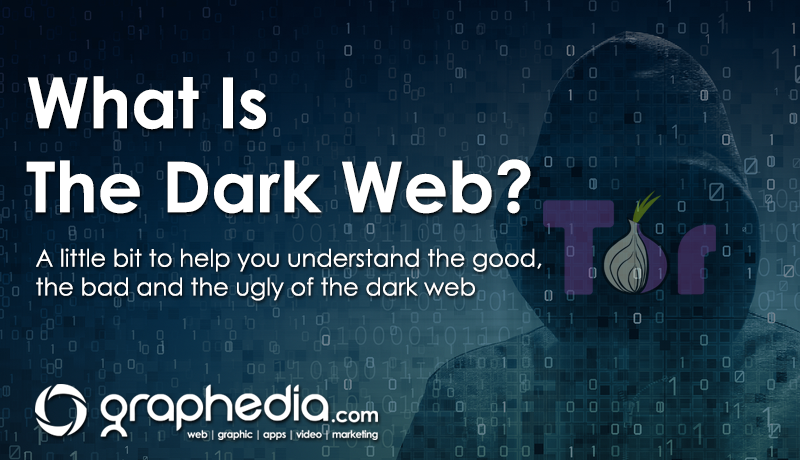 Dark Web : the part of the World Wide Web that is only accessible by means of special software, allowing users and website operators to remain anonymous or untraceable.

A little bit to help you understand the good, the bad and the ugly of “the dark web”.

By now, pretty much everyone is aware that their government can track what they do online. For this reason, the dark web is a valuable tool for those who have no interest in being followed. The dark web is, simply put, a part of the Internet that is not indexed by search engines, not easily accessible to everyone, and anonymous.

How the Dark Web Works

The dark web uses the Internet for communication between machines, just as “normal” websites do. However, accessing the dark web requires users to have specific software or configurations not available to most people.

The most popular domain suffix in the dark web is “.onion.”  This has nothing to do with small, pungent vegetables; rather, it is a reference to onion routing, a technique that uses encrypted information layered like the leaves of an onion. A full exploration of how it works is beyond the scope of this discussion. However, suffice to say, onion routing makes it much easier to hide online activity.

Users of the dark web frequently use Tor software. Tor is an acronym for “The Onion Router” and is a part of the onion routing setup. While it is not required to use Tor, it is far and away the most popular method of accessing the dark web.

Problems with the Dark Web

Of course, anonymity can lead to problems, and the dark web is no exception. It has been used for such unsavory activities as weapon and drug sales, contracts to engage in illegal activities, and so on.

One popular website was the Silk Road. The Silk Road was essentially an online market where people could purchase any number of illegal items using bitcoin currency. The United States federal government investigated the site and, in October of 2013, shut it down and arrested its founder. Ross Ulbricht was charged with conspiracy to traffic narcotics, computer hacking, and money laundering. (There were also issues with a murder-for-hire case, but that case is still pending.)

Still, as with anything else, the dark web does have good uses. For example, in some countries where free speech is restricted, it is used for political activities.

Be aware that—even on the dark web—it might still possible for a determined government actor to identify and track activity. Thus, users should not assume they are completely anonymous, and should govern themselves accordingly.

So there you have it, if you think the regular web has its weirdos, this is the twilight zone of the web (The Good, The Bad & The Ugly) that you should stay clear of unless you really really have too.